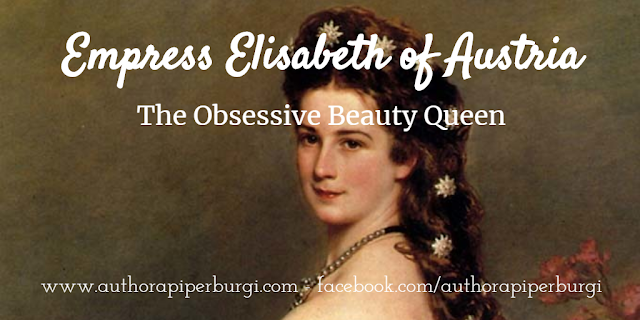 Empress Elisabeth of Austria (1837 - 1898), affectionately called Sisi by her close family members, was considered one of the most beautiful women of her time and a style icon. But this transformation didn't happen overnight. When she was a teenager, Sisi was rather plain-looking and at one point, could even be called plump. Then, after giving birth to her first child, Archduchess Sophie Friederike Dorothea Maria Josepha, this beautiful woman began to emerge.

Since a marriage proposal from Emperor Franz Joseph of Austria couldn’t be refused, they got married on the 24th of April 1854. However, the marriage was an unhappy one. The teenaged Empress, who had always longed for freedom and independence, found herself imprisoned in a golden cage called the Austrian imperial court for the rest of her life.

Perhaps it’s because of this that she became obsessed with her appearance. Staying thin was important to her. She was quite horrified by the sight of fat people or just the thought of becoming fat. She was preoccupied with her body weight and ensured she never weighed more than 50 Kilograms; a rather low weight considering she was 5 foot 8 inches tall. She was also repulsed by physical intimacy, hated what her pregnancies did to her body, and despised the thought of growing old.

So, how did this beautiful woman take care of herself?

Sisi had an incredibly slim figure and maintained a 19-inch waist throughout her adult life. She went to great lengths to keep it that way, and even slept with a cold, wet towel wrapped around her midsection to keep the muscles of her abdomen taut and supple. The Empress of Austria followed a stringent diet. She often only drank a bit of milk, freshly-pressed meat juice, or a mixture of egg whites and salt and ate a few slices of oranges or violet ice cream (her favorite). In addition, she frequently procured laxatives from the imperial pharmacy. To accentuate her slim waist, Sisi wore a tight-laced corset. Quite often she was sewn into her opulent dresses and gowns, so no lumps, bumps or creases from clasps and buttons were visible.

The Empress was one of the best equestriennes of her time, and when riding began to cause her too much joint pain, she turned to excessive walking. While walking was a common pastime, and often a recommended type of exercise for women of the time, Sisi enjoyed going on long walks that could last up to 10 hours. Even the pitiful protests of her ladies-in-waiting who accompanied her never stopped the Empress.


Sisi was also obsessed with gymnastics and worked out every day. It was a pastime that attracted a lot of criticism from courtiers as well as the imperial physician, as it was considered eccentric and indeed unseemly. After all, who wanted a sweaty Empress!? She even went as far as having workout equipment installed in her rooms at the Hofburg Palace, Schoenbrunn Palace, and the Hermesvilla.

Today, many historians believe that the Empress suffered from Anorexia Nervosa. Undoubtedly, she led a life that many others envied but was filled with duties, restrictions, and demands. Her life was strictly regulated by court etiquette and the Spanish Court Ceremonial. She was not allowed a personal life, which made her feel out of control. However, the one thing she could control was her appearance.

Empress Elisabeth used lots of creams and lotions on her face and body. She didn't stick to a specific one but often liked to experiment. Some of these concoctions sound delightful, like the strawberry pulp or rose petals used as a facial mask. Others were rather gross and somewhat disturbing, even by today's standards. For example, thin slices of raw veal placed on Sisi's face and then held in place by a leather mask overnight. I can only imagine how appalled her husband must have been at the sight of her with that contraption covering her features!

To keep her skin soft, Elisabeth often bathed in warm water infused with olive oil and used a lotion called Cream Celeste. It was a mixture of spermaceti, Cera Alba, sweet almond oil, and glycerin. This rich cream kept her skin well-moisturized, especially during the long winters.

Empress Sisi may have starved herself, exercised beyond exhaustion to maintain her thin figure, and tried every concoction to keep per face looking young and fresh, but preferred her natural beauty to artifice. She hardly ever wore makeup and was hypercritical of women who, in her opinion, wore too much coloring. One of those women was the strikingly handsome Princess Pauline von Metternich. Of her, the Empress wrote in her diary: “She wears two inches of red powder on her lips and is dressed in material from countries that are far away even though she is too flat."

Empress Elisabeth had luscious, chestnut-brown locks that almost touched the ground. Her hair was her pride and crowning glory, and she spent two to three hours per day sitting on a chair or on the billiard table to have it combed and styled.

In April 1863, Sisi hired Franziska (Fanny) Feifalik nee Angerer as her personal hairdresser and drew a lot of criticism at court because Fanny was a former theater hairdresser. The Empress had seen a beautiful hairstyle on the lead actresses one evening and wanted to know who was responsible for it. So, Fanny changed her job and became at least partly responsible for Sisi's famed beauty. It was not easy to work for such a demanding employer, but, on the other hand, Fanny Feifalik earned the same as a university professor at the time. For her efforts, she was eventually awarded the title of "Imperial Hairdresser".

Sisi would sit on a low chair in the center of her dressing room, while Fanny, dressed in white, including white gloves, would comb and style her hair into elaborate up-does. Once the procedure was done, the stray hairs would be collected from the comb and counted. If too many had fallen out, the Empress would get upset. This prompted Fanny to attach adhesive strips on the inside hem of her apron to hide the wayward strands of hair, thus avoiding Sisi's inevitable temper tantrums.


Empress Elisabeth was rarely seen with her hair down. The famous paintings of her wearing a loose robe with her hair unbound were intended for the private rooms of Emperor Franz Joseph, and not for the public eye. Since her hair was so long that it nearly touched the ground, it was also the cause for horrible headaches as it was so heavy. Nevertheless, she thought it her most precious beauty feature.

To pass the time while having her hair styled, the Empress studied languages such as Hungarian and Greek. Another, rather time-consuming procedure, was washing her hair. This was done every fortnight with a mixture of cognac and egg yolk and afterward conditioned with a so-called disinfectant. Once her hair was rinsed thoroughly, Sisi's hair was towel-dried and combed before she would walk up and down her dressing room until her hair was dry. Is it any wonder that it took the Empress all day to wash her hair?

All her efforts definitely bore fruit, and the Empress maintained her youthful looks well past her middle-age. At age 40, Sisi decided to refuse to be photographed of have her portrait painted and often hid her face behind a parasol or fan from opportunistic photographers. Everything contributed to the myth that Empress Elisabeth's beauty never diminished and to this day, is considered one of the greatest beauties of her generation.

Want to know more about this fascinating yet complicated woman? Try the first three books of my Country Girl Empress series: 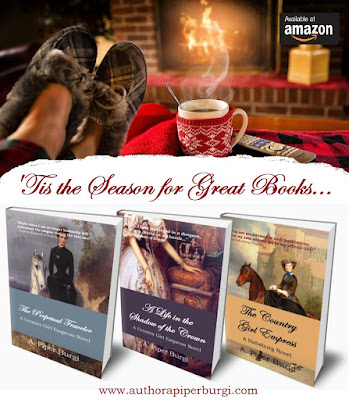 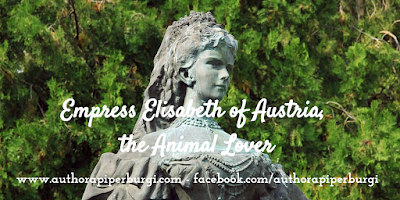 Over the last few weeks, I've received several inquiries asking me to write at least one article about some lesser-known facts regarding the main character of my Country Girl Empress series, Empress Elisabeth of Austria, Queen of Hungary. Since I share the trait of being an animal lover with the late Empress, I thought it was only fitting to start with this little known fact...