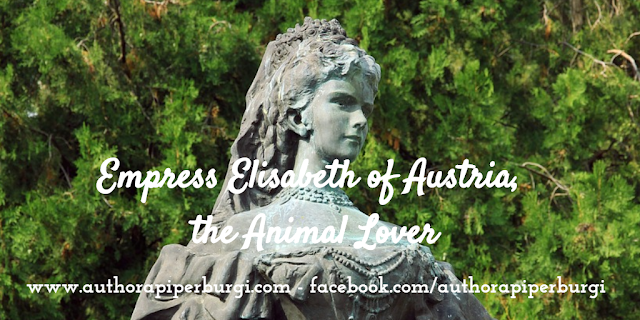 Over the last few weeks, I've received several inquiries asking me to write at least one article about some lesser-known facts regarding the main character of my Country Girl Empress series, Empress Elisabeth of Austria, Queen of Hungary. Since I share the trait of being an animal lover with the late Empress, I thought it was only fitting to start with this little known fact.

Empress Elisabeth, affectionately referred to by her family as Sisi, was undoubtedly an animal lover. She was considered one of the best equestriennes of her time, and she owned numerous dogs. Many photographs and paintings depict her favourite ones. Sisi likely had more photos taken with her dogs than with her human family members. Luckily, her lifetime coincided with the development of photography. So, plenty of pictures have survived the test of time for us to admire today.

"I fear a dog breed large enough for my tastes does not exist!"
-Empress Elisabeth of Austria

The Irish Wolfhound was one of her favourite dog breeds. She named her first Irish Wolfhound puppy "Shadow", and the dog was aptly named as it followed her from room to room. This was the first dog to carry that name, and at least two others "inherited" it.

The Empress did not only have one but at least two more Irish Wolfhounds of similar coloring. She was said to have preferred larger dogs such as Great Danes, Leonberger, and Greyhounds. However, there are several photos still in existence today that show here posing with smaller ones, among them a black Poodle and a Miniature Pinscher.

Although many photos of Sisi and her dogs have survived, not all the names of the dogs are known. In addition to Shadow, as mentioned earlier, there were others named Houseguard, Dragon, Diana, Roma, Hamlet, and Plato...just to mention a few. Empress Elisabeth loved Shakespearean dramas, notably "A Midsummer Night's Dream".

Elisabeth's son, Crown Prince Rudolph actually remembered his canine friends in his Last Will and Testament and bequeathed his gun dogs and luxury hounds to his shooting companions, loaders, as well as assorted staff members. It seems he, as well as his siblings, had inherited their passion for dogs from their mother, along with other personality traits. Their father, Emperor Franz Joseph showed no particular fondness for dogs.

I hope you enjoyed those little tidbits about Empress Sisi and quenched everyone's initial thirst for more information about this fascinating woman!