I am so excited to reveal the cover of my upcoming historical fiction novel: EXCERPTS FROM THE IMPERIAL DIARY - A Country Girl Empress Novel. To make it a little more interesting, I decided to turn it into a game. Below, you will find two images of the new book cover, but there's a difference. Can you spot it? If so, go ahead and comment that you found it. Spoiler alert! Some of you might be too excited to keep the answer to yourself, and that's alright. So, if you don't want to risk seeing a spoiler, then you might want to avoid reading the comments at first, and don't forget to read on to get the inside scoop! 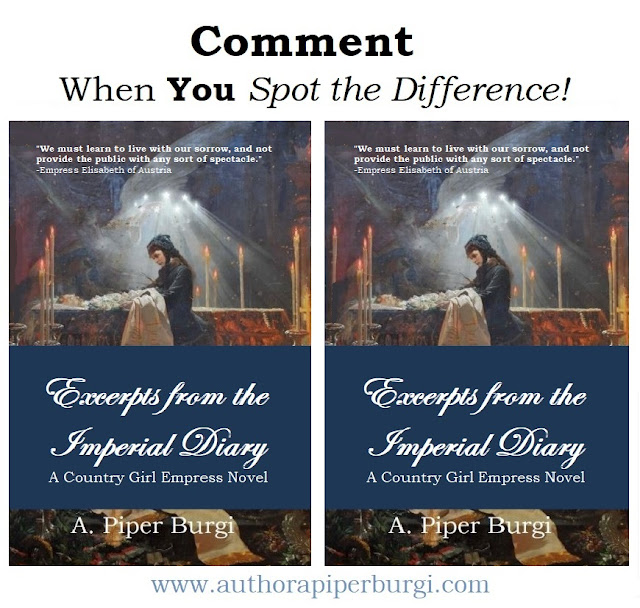 Empress Sisi is still youthful, gorgeous, and desired by many. She is loved and honored by her husband, Emperor Franz Joseph I of Austria-Hungary, but all too soon they are hit by tragedies they are powerless to prevent.

Although the King pays for his pet projects with his own funds, it does not spare Bavaria from financial ruin. Feeling harassed and irritated by his ministers, King Ludwig considers dismissing the entire cabinet and replacing them with fresh faces. However, the cabinet members agree to act first. Seeking a cause to depose their King by constitutional means, the rebelling Bavarian ministers decide on the rationale that he is mentally unfit and therefore unable to rule.

They ask Ludwig's uncle, Prince Luitpold, to step into the royal vacancy once the monarch is removed. Luitpold agrees, on the condition that the conspirators produce solid proof that the King is indeed insane. Then King Ludwig II loses his life under mysterious circumstances. Was it suicide or is someone strategically eliminating members of the House of Wittelsbach?

Meanwhile, at court, many people, including the imperial couple and Crown Princess Stéphanie, know that Rudi has plenty of extra-marital affairs. His newest conquest is 17-year-old Baroness Mary Vetsera, daughter of Baron Albin Vetsera and his wife, Helene Baltazzi. Rudolph’s marriage to Steffi is not a particularly happy one and results in the birth of their only daughter, Archduchess Elisabeth, affectionally referred to as “Erzsi”.

The sudden, and violent death of Sisi’s only son, Crown Prince Rudolph at his hunting lodge Mayerling, shakes the Monarchy to its core. And the fact that the dead body of his teenaged mistress is found right next to his completes the scandal. How will the imperial couple cope with this devastating loss? Does this tragedy mark the end of the Danube monarchy, since Rudolph only had a daughter? And will their love and faith in each other allow Sisi and Franz Joseph to master these difficult trials?

Are you eager to learn more about the book? If so, more snippets are coming your way soon! EXCERPTS FROM THE IMPERIAL DIARY is coming to your favourite online book retailer in 2020.