Book Cover Reveal: A LIFE IN THE SHADOW OF THE CROWN - A Country Girl Empress Novel

I am so excited to reveal the cover of my upcoming historical fiction novel: A LIFE IN THE SHADOW OF THE CROWN - A Country Girl Empress Novel. To make it a little more interesting, I decided to turn it into a game. Below, you will find two images of the new book cover, but there's a difference. Can you spot it? If so, go ahead and comment that you found it. Spoiler alert! Some of you might be too excited to keep the answer to yourself, and that's alright. So, if you don't want to risk seeing a spoiler, then you might want to avoid reading the comments at first, and don't forget to read on to get the inside scoop! 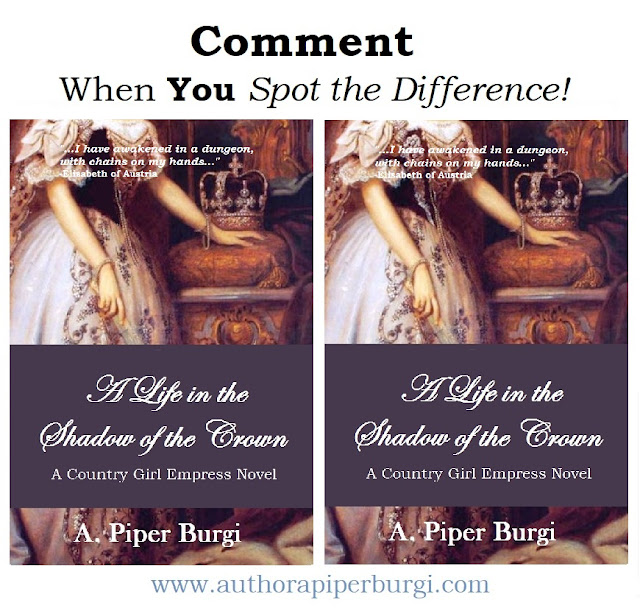 The stressful wedding festivities are finally over, and Sisi and Franz Joseph can begin to navigate their lives together. However, fresh challenges await the newlywed couple.

When Sisi, the Country Girl Empress, from the Bavarian Possenhofen became Emperor Franz Joseph’s wife, she was only sixteen years old. The child-woman who is admired everywhere for her beauty and unaffectedness, feels most at home on top of a horse. Soon she must realize that the imperial throne is much more uncomfortable than a saddle, and that it is her highest duty to give birth to an heir.

Are you eager to learn more about the book? If so, more snippets are coming your way soon! A LIFE IN THE SHADOW OF THE CROWN is coming to your favourite online book retailer in Autumn 2018.