The Empress's Diadem - Book 7 of The Country Girl Empress Series 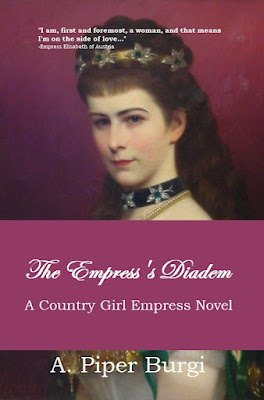 Now Available!
Excerpt
Order now: Amazon
The heir to the throne, Archduke Franz Ferdinand, is faced with a difficult choice: Bidding farewell to the love of his life, Countess Sophie Chotek, and instead, fulfill his duty to the dynasty by marrying a stranger. He turns to Aunt Sisi for help in this crisis of the heart. She understands her nephew and wants to help him. However, she also loves her husband, with whom she has shared so much happiness and countless heartbreaks.

But the old laws of the House of Habsburg and the traditional-thinking Emperor Franz Joseph seem to make their relationship impossible. To be eligible to marry a member of the imperial House of Habsburg, one has to be a member of one of the reigning or formerly reigning dynasties of Europe. The Choteks are not one of these families.

Over and over, Empress Elisabeth of Austria seeks to escape the magnificent but spiteful Viennese court. She travels to foreign lands accompanied by her new Grand Chamberlain, General Béla Berzeviczy, and her ladies-in-waiting. However, she cannot avoid attending a once-in-a-lifetime event: The thousand-year anniversary of the Hungarian Kingdom!

The whole country is waiting for the state celebrations, exhibitions, and some representative new buildings to be completed on time. The largest exhibition is to be held in the City Park of Budapest, with dozens of structures and pavilions promoting the country’s historical, economic, and cultural greatness.

And the preparations for this massive event have already begun. Sisi is subjected to strenuous dress fittings and meetings with the K. and K. dressmaker, Madame Fuchs, and her crew since Her Majesty’s wardrobe for the occasion is of national importance. They are, after all, her beloved Magyars that want to see the “Hungarian Angel” on their soil again.

Vienna and Budapest, two pearls on the shores of the Danube River, are the focal point of the Empire. And they force Sisi into a dangerous conflict because her heart beats for the Hungarian nation. She is determined to calm the tensions between the two cities. With all her might, she fights against the many political interests and biases.