My Afghanistan Campaign Diary: Views of a Military Spouse 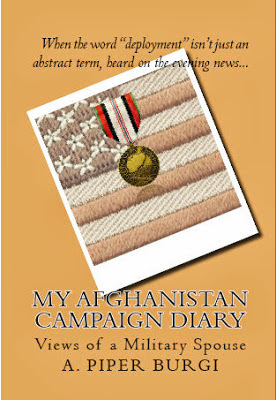 Order Now:   Out of Print

When the word "deployment" isn't just an abstract term, heard on the evening news...

Have you ever wondered what it would feel like to be military spouse? Spending your time wondering where on this globe your significant other is or whether he/she is all right? During these days of drawn-out deployments in support of the war on terrorism it's not always easy to find the strength to go on. ﻿﻿Throughout the ages the members of the military have been quietly supported not only by communities, friends and family members but by their significant others, spouses and life partners and often this support has gone unnoticed. Seldom are the difficulties that the military lifestyle brings candidly discussed before anyone joins its ranks.

My Afghanistan Campaign Diary is a brutally honest look at the emotional and mental toll of deployments. It openly describes the moving story about the day-to-day lives of an Air Force Pilot and his family before, during and after his 7-month long deployment. It recounts the tests, trials and heartbreaks they experienced during this time, when the word "deployment" isn't just some abstract term heard on the evening news. It is the harsh reality of military life and it turns your world upside down. All this and more set against the backdrop of rugged Alaska and the unrelenting heat of Afghanistan. This heartstring-pulling wartime memoir is not a glorified account of a military campaign, but an honest narrative of the struggles faced by this military spouse and as such an asset to any person who desires to better understand the military lifestyle and a must-have for all military spouses. Don't miss this powerful story about sacrifice, commitment and family!