Love, Power, and the Emperor Waltz - Book 6 of The Country Girl Empress Series 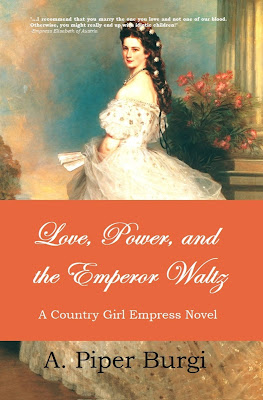 Over and over, Empress Elisabeth of Austria seeks to escape the magnificent but spiteful Viennese court. She travels to foreign lands accompanied by her old, faithful Grand Chamberlain, Baron Nopsca, and her ladies-in-waiting. But as soon as she returns home, she is confronted with the upcoming visit of Grand Duke Nikolaj Aleksandrovič Romanov of Russia. To smooth things over between the two Empires, Franz Joseph plans to host a reception, banquet, and one of Vienna’s famous balls at Schönbrunn Palace. To give the festivities an air of a familial get-together, he expects Sisi to attend, even though she’s still in mourning.

The rest of her extended family doesn’t make it any easier for the overwhelmed Empress. Sisi finds out that the future heir presumptive, Archduke Franz Ferdinand, has fallen head over heels in love with a simple Bohemian noblewoman. Unfortunately for him, Sophie Maria Josephine Albina Countess Chotek von Chotkow and Wognin is far below his own societal rank.

The connubium of the House of Habsburg and the traditional-thinking Emperor Franz Joseph seem to make the young people’s relationship impossible. To be eligible to marry a member of the imperial House of Habsburg, one has to be a member of one of the reigning or formerly reigning dynasties of Europe. The Choteks are not one of these families. Deeply in love, Franz Ferdinand refuses to consider marrying anyone else that includes the Emperor’s suggestion he marry Crown Princess Dowager Stéphanie.

The Emperor decides to send his potential heir to the throne on a world tour. He hopes that he will finally forget about the “unworthy” bride that his nephew has chosen. One whole year must the young Archduke spend away from home. No contact is allowed between the two lovers. In desperation, Archduke Franz Ferdinand turns to the only person whom he trusts – his aunt, Empress Sisi. She understands her nephew and wants to help him. However, she also loves her husband, with whom she has shared so much happiness and countless misfortunes.

And as if that wasn’t enough, Crown Princess Dowager Stéphanie and Princess Elisabeth of Bavaria, Archduchess Gisela’s oldest daughter, don’t make life any easier for the Emperor. Steffi’s fallen in love with her Grand Chamberlain, Count Elemér Lónyay, and Sisi’s granddaughter, Princess Elisabeth, eloped with Otto Baron zu Hagenbach. These relationships are no less undesirable than the one Franz Ferdinand pursues.

For her part, the Empress cannot bear the strains and constraints of life at the imperial court and embarks on an odyssey crisscrossing the Mediterranean Sea. From Algiers to Gibraltar to Spain, Portugal, Corfu – everywhere she goes, she is haunted by the past, unable to find inner peace. But with her incessant travel mania, she not only hurts her husband deeply but gives the oppositional forces plenty of reason to speculate that she’s become unhinged. An insane woman is wearing the Austrian crown – that is gossip the House of Habsburg can’t afford or tolerate!