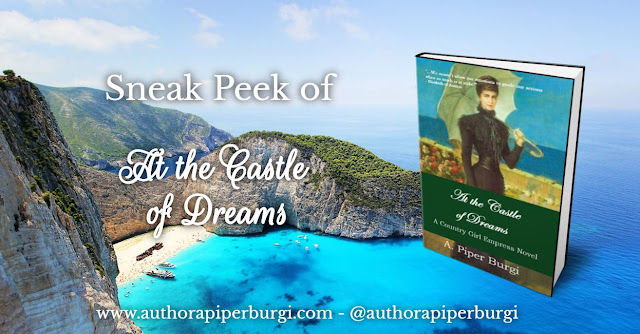 As most of my readers know by now, I've been diligently working on my next historical fiction piece, AT THE CASTLE OF DREAMS for some time, and the fifth book of The Country Girl Empress series is nearly ready to hit a bookshelf near you. I can also well imagine that many of you wouldn't mind a sneak peek. Well, you won't have to wait any longer. Here it is....Enjoy!

Piper
PS: Please keep in mind that this is just an excerpt of an unpublished manuscript, and although it has undergone several rounds of vigorous editing already, it's not the polished, final product. Thank you!  =)

The Secret of Mayerling

The city of Vienna was filled with rumors and speculations. The newspapers published special editions, bordered with a black edge. Foreign papers were being confiscated left and right. But a few hundred issues almost always escaped the police’s grip. They were passed on in secret. The articles were read over and over, and their contents spread like wildfire.

In public houses, cafes, and plenty of cabs, such papers could be “rented” in exchange for a pretty penny. They were brought out from their secret hiding places and read in the backroom of public houses or in a closed carriage with the curtains half-way drawn, and then returned to their respective owners. Their contents were not necessarily the truth, but the stories were definitely sensational.

The mysterious and sudden death of Crown Prince Rudolph naturally heated the people’s temperaments. Had he become the victim of a hunting accident, or did he indeed have a heart attack? At least that’s what the newspapers had reported shortly after the Crown Prince’s death. However, those special editions received their information from the K. and K. Court Press Bureau. But the question staring in everyone’s face was this: Could the source be trusted?

Soon enough, people heard and read many different versions. Was the Crown Prince poisoned? Mr. Loschek, Rudolph’s valet, who had been one of the first people to discover the bodies, testified that there was more than likely cyanide in the water on the bedside table. So, what really happened at Mayerling? Did the Crown Prince shoot himself, or had he been knocked over the head with a champagne bottle? Those and similar theories were voiced by the people who had seen Rudi’s dead body with his head wrapped in gauze. Was it a love story gone horribly wrong, or did a killer commando of a foreign power assassinate the Crown Prince of the most powerful Empire in the world? What did the imperial court know, and what were they hiding?

Slowly but surely, the news leaked that a second body had been discovered at Mayerling, and rumor had it that it was the corpse of young Freiin Mary Vetsera. She was barely 17 years old and lived in the third Viennese city district. During the night, the poor girl’s body had been secretly removed and expediently buried at the cemetery of Heiligenkreuz. Her mother had gone half-mad over the loss, had been issued an imperial gag order and forced to leave the country.

What was so mysterious about those two dead bodies? How did the young woman get to Mayerling, and how did Mary Vetsera die? Had she become an unwilling witness to Rudi’s murder, and that’s why she had to perish as well? The conundrum weighed heavily on the grieving Empire during one unusually cold February day. Black flags of mourning were on display all throughout Vienna.

by A. Piper Burgi
Piper is the author of several non-fiction books, and recently added five historical fiction novels to her ever-expanding collection of published writings, In the Shadow of Her Majesty, The Country Girl Empress, A Life in the Shadow of the Crown, The Perpetual Traveler, and Excerpts from the Imperial Diary. When she isn't busy typing on her computer, she can be found chasing after her furry children or holding on tightly to a good cup of coffee. Follow her on LinkedIn, Facebook, Instagram, and Goodreads.
Don't forget to share this post! Choose your platform below: