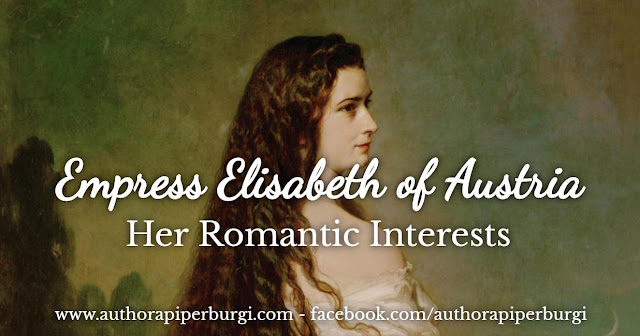 Empress Elisabeth of Austria was loved and worshiped by many, especially in Hungary, during her lifetime. Even more so after her tragic death. She was considered one of the most beautiful women of her time, and that such a woman would be admired and desired, is nothing unusual. As such, it shouldn't come as a surprise that she evoked those butterfly feelings not only in her husband but also in other men. And while this list of admirers might not be complete, it does touch upon some of the most prominent ones.

The fifteen-year-old Elisabeth and the twenty-three-year-old Franz Joseph met in the fashionable resort of Bad Ischl in the summer of 1853. It was technically for the second time, as they had met some years earlier since they were first cousins. Duchess Ludovika and her oldest daughter, Helene, affectionately called "Néné", were invited by the Emperor’s mother, Archduchess Sophie, who was Ludovika’s elder sister. Sophie intended to introduce Néné and Franz Joseph to each other.

When meeting Franz Joseph, Ludovika, Helene and Sisi were wearing mourning dresses because of the death of an aunt, and they had not had time to change dresses before the tea party organized by Archduchess Sophie. The simple, black dress fitted Sisi perfectly, while it made Néné seem too strict.

And so things came as they must: The young Emperor fell head over heels in love with the naive Sisi, who had no idea what it meant to be the wife of an Emperor. The following day, Franz Joseph made his decision and told his mother with a delighted face that he found Sisi fascinating. He revealed his intentions in front of the court that very evening during a ball. Much to the assembled guests' astonishment, when it was the time for the cotillion, a confident Emperor walked straight towards Sisi and handed her a bouquet of flowers. The young girl, who did not know that this action was nothing short of a wedding proposal, felt embarrassed.

As his fiancée, Elisabeth was scared of the future life she would have to face alone in Vienna, the representational duties, and her obligations. Sisi was a shy young lady who did not like to be the center of attention. The wedding of Franz Joseph and Elisabeth took place on the 24th of April 1854. Sisi and Franz were first cousins, so a papal dispensation was needed before their wedding.

While their marriage started out like a fairy tale, it quickly turned into quite a nightmare for the young and inexperienced girl. She couldn't adapt to the rigid Spanish court ceremonial, which reigned supreme at the Viennese court or her strict mother-in-law. Franz Joseph tried to do everything to make his beloved Sisi happy. However, he rarely confronted his mother to protect his wife. There was a reason why Archduchess Sophie was commonly referred to as "the only man at the Hofburg Palace". Sisi withdrew more and more and increasingly turned her back on life at court and her husband.

From the 1860s on, the couple no longer led a married life. Instead, Franz Joseph and Elisabeth maintained a bond of friendship, corresponding and meeting regularly. With her full support, Burgtheater actress Katharina Schratt became the aging Emperor’s most important source of emotional support. "You have no idea how much I loved this woman," the Emperor is said to have exclaimed after his wife's murder.

He was the third son of Archduke Franz Karl and Archduchess Sophie and Emperor Franz Joseph's younger brother. If we were to believe Ernst Marischka's Sissy-trilogy, then Karl Ludwig discovered his affections for a very young Sisi before his older brother. He supposedly saw something in his 12-year-old cousin, that Franz Joseph couldn't see at the time - a blossoming beauty. Whether or not he was the first boy who kissed her, and they actually exchanged small gifts, shall forever remain their sweet little secret.

Karl Ludwig married three times. His first wife, whom he married on 4 November 1856 at Dresden, was his first cousin Margaretha of Sachsen, the daughter of Johann of Sachsen and Amalie Auguste of Bavaria. She died childless on the 15th of September 1858.

His second wife, whom he married by proxy on the 16th of October 1862 in Rome, and in person on the 21st of October 1862 in Venice, was Princess Maria Annunciata of Bourbon-Two Sicilies, daughter of King Ferdinand II of the Two Sicilies and his wife, Archduchess Maria Theresa of Austria (1816–1867). They had four children.

His third wife, whom he married on the 23rd if July 1873 at Kleinheubach, was Infanta Maria Theresa of Portugal, daughter of King Miguel I of Portugal and Adelaide of Löwenstein-Wertheim-Rosenberg (1831–1909). They had two daughters.

Archduke Karl Ludwig died of typhoid fever at Schönbrunn Palace after he returned from a journey to Palestine and Egypt, allegedly after he consumed contaminated water from the Jordan River.

He was Elisabeth's cousin and, supposedly, her soulmate. When Ludwig first ascended the throne, he was considered extraordinarily handsome and exceptionally tall. He was the patron of composer Richard Wagner, subsidizing his work and extravagant lifestyle. However, his and Elisabeth's family, the House of Wittelsbach, was cursed with insanity.

As King Ludwig grew older, his behavior became increasingly eccentric and bizarre. He would indulge in fantastic coach, boat, and sleigh rides through the mountainous Bavarian countryside - often in the middle of the night. For a short while, Ludwig was engaged to Sisi's younger sister, Sophie Charlotte. But Ludwig had a hidden side: He was homosexual. Much to the chagrin of the bride's family, the King he broke off the engagement without explanation.

Despite it all, Ludwig and Sisi remained friends throughout his life. They shared many other passions, such as the ravishing Bavarian scenery of Lake Starnberg and the mountains. To this day, King Ludwig is remembered for his obsession with building more castles, like Neuschwanstein, Linderhof, and his masterpiece, Castle Herrenchiemsee, which he modeled after Versailles Palace.

He squandered his immense personal fortune and nearly ruined the Bavarian economy with his projects. Finally, members of the Bavarian government, spearheaded by Ludwig's uncle, Prince Luitpold, had the Bavarian King declared insane by a physician who never examined him. Their justification was a simple one: Ludwig's younger brother, Otto, had already been committed to an asylum for his insanity.

King Ludwig was deposed and imprisoned at Berg Castle, on the eastern shore of Lake Starnberg. The unhappy King apparently drowned in the shallow waters of the lake, alongside the psychologist Doctor von Gudden, even though Ludwig was a strong swimmer. His death remains a mystery to this day. Was it a coincidence that the Empress was staying nearby in Possenhofen when the tragedy occurred? Was the Empress trying to reach him and help him escape his captors? I suppose we'll never know.

The son of Count Károly Andrássy and Etelka Szapáry was born in Oláhpatak, Kingdom of Hungary. His liberal father, belonged to the political opposition, at a time when questioning the government was very dangerous. Gyula Andrássy, from an early age on, threw himself into the political struggles of the day.

He was a dashingly handsome and flamboyant Hungarian aristocrat, who had taken an active part in the 1848 Hungarian rebellion against Emperor Franz Joseph. With the defeat of the Hungarian forces, the Count fled to Paris, where he became a popular figure in high society. He even acquired a beautiful, rich wife, Countess Katinka Kendeffy, along the way.

When the Count was finally allowed to return to his Hungarian homeland, he began to campaign for a reorganization of the Empire into an Austro-Hungarian dual monarchy. Emperor Franz Joseph, who had condemned Andrassy to death during his exile, was against this. His wife, Elisabeth, on the other hand, loved the Hungarian countryside. She identified with the life philosophy of the Magyar people and greatly admired their skills with horses. As Queen of Hungary, Sisi saw it as her duty to learn the Hungarian language, which she eventually spoke, wrote, and read fluently.

Consequently, Count Andrassy obtained her support for a reform of the Habsburg Empire. The result of Sisi's lobbying was the "Hungarian Compromise" of 1867, under which the two halves of the Monarchy became autonomous. Count Andrassy's reward was to become Prime Minister of the Hungarian half of the dual monarchy. A duty which he fulfilled faithfully for many years. He was the first Magyar statesman who, for centuries, had occupied a European position of this magnitude.

Wicked rumors were spread that Empress Elisabeth and Count Andrassy were lovers. Cruelly wagging tongues even suggested that Sisi's youngest daughter, Archduchess Marie Valerie, was Andrassay's offspring. I have no doubt that they admired each other. Still, I find it highly unlikely that their friendship ever went beyond a platonic attachment. Count Gulyas Andrassy died of bladder cancer, aged 66, in 1890.

A was Scottish cavalry officer, an equerry to the 5th Earl Spencer, and a noted, if somewhat reckless, horseman. Captain Middleton was one of the best and most popular riders in the United Kingdom. When Empress Sisi went fox hunting in Ireland, Bay Middleton was her pilot, and often rode the winners over the stiffest steeplechase courses. The origins of his nickname "Bay" are somewhat unclear. It was either a reference to his reddish-brown hair or derived from the name of the Derby winner in 1836.

Sisi, one of the best equestriennes of her time, admired him for his equestrian panache. So much so, Emperor Franz Joseph invited "Bay" Middleton to stay, with other members of the Empress's English hunting society, at her beloved Gödöllő Castle in Hungary. In 1875, Captain Middleton became engaged to Charlotte Baird, whom he married on the 25th of October 1882, at St. George's. The couple only had one daughter named Violet Georgina, born in 1886.

Captain William George Middleton died during the Midland Sportsman's Cup at Lord Willoughby de Broke's estate at Kineton. He was killed falling from his horse during the Parliamentary steeplechase. He was buried in full riding regalia in Northamptonshire. He was an eccentric man to the end!

This might have been the closest the Empress ever came to flirting. With most men, she thought of herself as the unattainable, beautiful lady, who should only be admired from afar but never touched. It was February 1874, and it was carnival season. Sisi had just returned from Hungary when the 34-year-old Empress got bored one evening. Sisi decided to attend a masked ball for which Vienna was renowned.

Wearing a yellow domino outfit that was so fashionable at the time, she had sneaked out of the palace with Ida von Ferenczy. Once at the ball, they found some seats perched up on the gallery. When Sisi got bored, she asked Ida to fetch a young man, she had spied from her position. He introduced himself as "Fritz Pacher von Theinburg", and they spent the evening conversing amicably. The young man soon suspected who his companion in disguise might be.

For several years after the event, the Empress would send him letters and postcards, which were posted for her by friends and relatives all over Europe. In them, she often referred to their meeting, but ultimately, Fritz Pacher von Theinburg, now middle-aged, and married with children, terminated their correspondence.

Piper is the author of several non-fiction books, and recently added five historical fiction novels to her ever-expanding collection of published writings, In the Shadow of Her Majesty, The Country Girl Empress, A Life in the Shadow of the Crown, The Perpetual Traveler, and Excerpts from the Imperial Diary. When she isn't busy typing on her computer, she can be found chasing after her furry children or holding on tightly to a good cup of coffee. Follow her on LinkedIn, Facebook, Instagram, and Goodreads.
Don't forget to share this post! Choose your platform below: