Book Cover Reveal: AT THE CASTLE OF DREAMS - A Country Girl Empress Novel 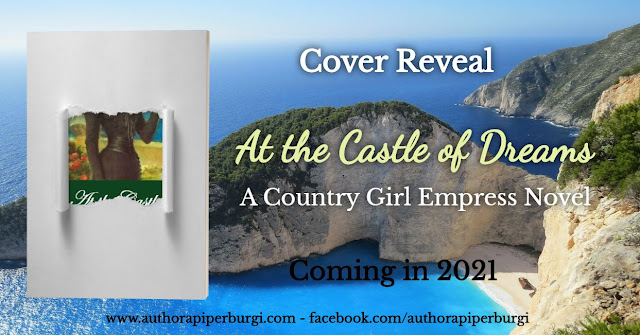 I am so excited to reveal the cover of my upcoming historical fiction novel: AT THE CASTLE OF DREAMS, book five of The Country Girl Empress series. To make it a little more interesting, I decided to turn it into a game. Below, you will find two images of the new book cover, but there's a difference. Can you spot it? If so, go ahead and comment that you found it. Spoiler alert! Some of you might be too excited to keep the answer to yourself, and that's alright. So, if you don't want to risk seeing a spoiler, then you might want to avoid reading the comments at first, and don't forget to read on to get the inside scoop! 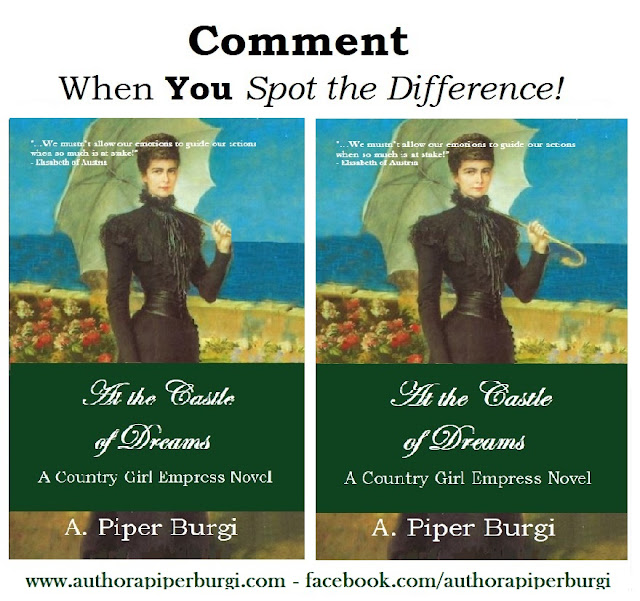 The sudden and violent death of Sisi’s only son, Crown Prince Rudolph at his hunting lodge Mayerling, shakes the Monarchy to its core. And the fact that the dead body of his teenaged mistress is found right next to his completes the scandal. How will the imperial couple cope with this devastating loss? Does this tragedy mark the end of the Danube monarchy, since Rudolph only has a daughter? And will their love and faith in each other allow Sisi and Franz Joseph to master these difficult trials?

And the search for the Heir Presumptive is on. For the moment, the Emperor’s younger brother, Archduke Karl Ludwig, fills that role, but one must plan for the future. So, who would fill the role better: Archduke Otto, nicknamed “the Clown”, or Archduke Franz Ferdinand, who is always plagued by one ailment or another?

Churned up and filled with doubts concerning the official version of the Mayerling incident, Empress Sisi attempts to uncover the truth about her son’s untimely death. But no matter where she searches, she faces a wall of silence. To escape the vicious rumors and regain her inner peace, the Country Girl Empress turned Perpetual Traveler journeys to Greece. On the 16th of October 1889, Crown Prince Rudolph’s best friend and uncle, Archduke Johann Salvator resigns his army commission and renounces his title and the privileges he enjoys as a member of the Austrian imperial family. Afterward, he assumes the name Johann Orth and marries Ludmilla "Milli" Stubel, an opera dancer, in London. Shortly after their wedding, he purchases the ship “St. Margaritha”, and he and his wife set sail for South America.

In February of the following year, the former Archduke’s ship sets off from Montevideo, Uruguay, heading for Valparaíso in Chile. They were last seen on the 12th of July in Cape Tres Puntas, Argentina. Everyone believes that the St. Margaritha was lost during a storm off the coast of Cape Horn. Have Johann Orth and his wife become the newest victims of the forces that already eliminated the Crown Prince? Was their demise just an unhappy coincidence, or did they indeed escape their pursuers by changing their names, fleeing deeper into the jungles of South America?

After her son's violent death, Sisi commissions the construction of a palace on the island of Corfu called the “Achilleion”, after Homer's hero Achilles in “The Iliad”. Located about ten kilometers south of the city of Corfu, it provides a panoramic view of the town to the north, and across the whole southern part of the island to the Ionian Sea, and becomes Sisi’s favorite holiday destination. She wants to create a place that gratifies her admiration for Greece, its language, and culture. But she realizes all too soon that her “Castle of Dreams” is nothing by a shackle and even considers selling it. How much more loss and misery can the unsteady spirit of the Empress endure?

Are you eager to learn more about the book? If so, more snippets are coming your way soon! AT THE CASTLE OF DREAMS is coming to your favourite online book retailer in 2021.

Piper is the author of several non-fiction books, and recently added five historical fiction novels to her ever-expanding collection of published writings, In the Shadow of Her Majesty, The Country Girl Empress, A Life in the Shadow of the Crown, The Perpetual Traveler, and Excerpts from the Imperial Diary. When she isn't busy typing on her computer, she can be found chasing after her furry children or holding on tightly to a good cup of coffee. Follow her on LinkedIn, Facebook, and Goodreads.
Don't forget to share this post! Choose your platform below:

PS: Please note that I am taking a break from my book tour this upcoming Sunday, the 31st of May 2020. Join me again the following Sunday, the 7th of June 2020, as I take my newest book, EXCERPTS FROM THE IMPERIAL DIARY, book four of The Country Girl Empress series, on one last blog tour stop.  Learn more about me and my newest historical fiction novel. My last stop will be author Sky Taylor's blog!