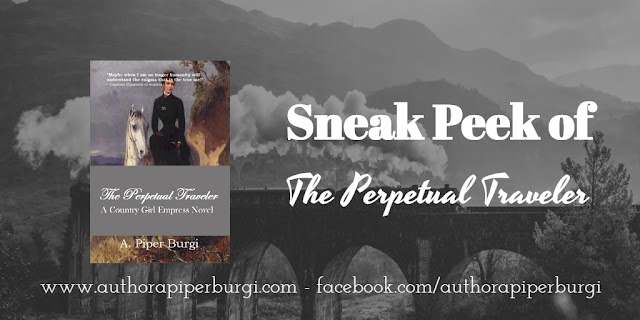 As most of my readers know by now, I've been diligently working on my next historical fiction piece, THE PERPETUAL TRAVELER for some time, and the third book of my Country Girl Empress series is nearly ready to hit a bookshelf near you. I can also well imagine that many of you wouldn't mind a sneak peek. Well, you won't have to wait any longer. Here it is....Enjoy!

PS: Please keep in mind that this is just an excerpt of an unpublished manuscript, and although it has undergone several rounds of vigorous editing already, it's not the polished, final product. Thank you!  =)

Piper is the author of several non-fiction books, and recently added three historical fiction novels to her ever-expanding collection of published writings, In the Shadow of Her Majesty , The Country Girl Empress., and A Life in the Shadow of the Crown. When she isn't busy typing away on her computer, she can be found chasing after her furry children or holding on tightly to a good cup of coffee. Follow her on LinkedIn, Facebook, Goodreads and Google+.
Don't forget to share this post! Choose your platform below: