Sneak Peek of A LIFE IN THE SHADOW OF THE CROWN 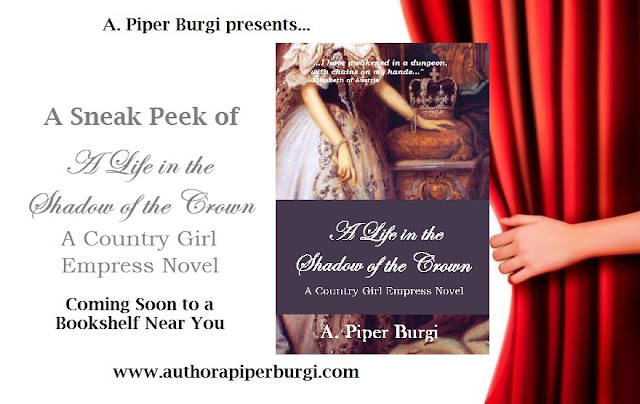 As most of my readers know by now, I've been diligently working on my next historical fiction piece for some time, and I can well imagine that many of you wouldn't mind a sneak peek. Well, you won't have to wait any longer. Here it is....Enjoy!


It was the 24th of April 1854 at St. Augustine Church in Vienna. Accompanied by the music of trumpets and kettle drums, the newlywed imperial couple exited the building. As the Emperor and his Empress stood in front of the portal and presented themselves to their people, Franz Joseph gently leaned over and whispered in his wife’s ear: “Are you happy, my Angel?”
The young Empress looked up at her husband, and with a gentle smile on her lips, she replied: “How could I not be? I love you!”
But all the while Sisi couldn’t help but think for the one-thousand and first time: It could all be so wonderful if he wasn’t the Emperor!
After their return to the Hofburg Palace, Sisi and Franz Joseph were required to receive the congratulatory wishes from every last one of their invited guests until late at night.
The ambassadors and representatives were already lined up in the audience chamber, and Sisi was not given one moment to rest or reflect on her own feelings. Foreign Minister Count Karl Ferdinand von Buol-Schauenstein introduced the gentlemen one by one, and Sisi smiled and nodded magnanimously while they wished her and the Emperor all the best for the future. Then it was on to the mirror room because the wives of said representatives must be introduced to the new Empress. After that, the newlywed couple was escorted into the ceremony hall. It was the palace and apartment worthy ladies as well as the stewards and courtier’s turn to be officially presented.
Until now, Sisi had done everything to curb her temper and allowed others to guide her from room to room. But as she was faced with yet another massive crowd of strange, curious faces, she decided that she has had enough. She tore her hand free of her husband’s grasp and without further ado ran into one of the antechambers. Sobbing uncontrollably, she hid her face in a handkerchief.
It didn’t take but half a minute before Archduchess Sophie entered the room as well.
“What are you thinking, you undisciplined girl! For once can’t you conduct yourself like a well-behaved young lady?”
But Sisi had already regained her comportment and stepped in front of one of the many mirrors to wipe away her tears.
“Do you not wish to answer me?”
But the new Empress continued to remain silent and rushes past an angry Sophie, back into the ceremony hall. Countess Esterházy hurried to her side and began to enumerate the names and titles of the ladies. Afterward, an embarrassing silence set in. According to protocol, the noble ladies had to wait until the Empress addressed them, as they were not allowed to utter one word until then. But Sisi couldn’t think of a suitable subject matter to save her life. Countess Esterházy saw no other choice but to save the situation by allowing the ladies to say a few words to their new Empress. The aristocratic women stepped forward one at a time, to congratulate Sisi and kiss her hand. Archduchess Sophie had just turned her head for a moment but continued to critically observe her new daughter-in-law from the corner of her eyes.
“Oh, my Heavens, what is she doing now?”
Among the girls, Sisi had discovered her Cousin Adelgunde from Bavaria and embraced her. Before she could release her cousin, Sophie was by her side, grabbed her daughter-in-law hard by her upper arm and pulled her aside.
“Did you not hear that the ladies are supposed to kiss your hand?”
“But that’s my cousin. She often visited me in Possenhofen,” Sisi protested and sought to free her arm from her hard grip.
“It is no longer of consequence, who you played with as a child. You are the Empress of Austria. Now go back and have your cousin kiss your hand!”
Reluctantly Sisi obeyed. Everyone in the room had noticed what happened, and gossip about it made the rounds. Some of the noble ladies felt sorry for Sisi, but the majority did not hold back and whispered nasty comments about the new Empress, who apparently didn’t know how to behave appropriately. Thankfully Franz Joseph joined his wife shortly after that.
“We must go for another drive, Sisi. Please ask one of your ladies-in-waiting to bring you a shawl. It’s chilly outside.”
The quick drive gave the couple a very much needed break from the representational duties. The Kohlmarkt and the Michaelerplatz were illuminated by thousands of candles. Sisi and Franz Joseph nodded friendly towards their subjects while they offered a standing ovation to their beloved Emperor and Empress before the couple returned to the palace.
There, everything had been prepared for a gala dinner. Sisi had finally rested a bit and engaged interestedly in small talk with her table neighbors. Eventually the last guests departed. Now the last act of the ceremony followed, which had been somewhat modified for Sisi’s sake. Typically the entire court was required to pay witness when an imperial couple was brought to bed....