A Book Launch Celebration and a Giveaway! 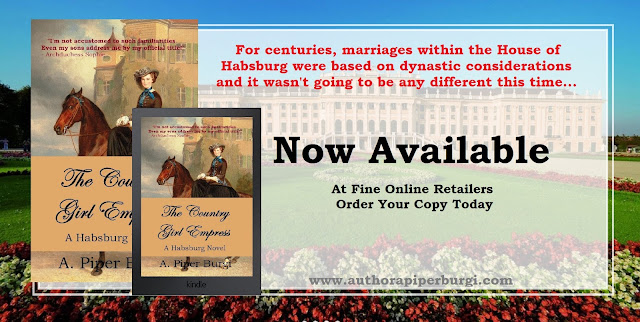 Today I celebrate a significant milestone. I'm excited to announce the launch of my newest historical fiction novel The Country Girl Empress! I still can't believe it myself...the book hits virtual bookshelves today. And to help celebrate I'm giving away a copy of my book. To enter the giveaway just click the link below and follow the instructions.

The plot is centered around real historical figures of mid-19th century Austria such as the complex Princess Elisabeth in Bavaria, Emperor Franz Joseph I - the most powerful man of his time, Archduchess Sophie - the Emperor's mother and "the only man at the Hofburg Palace", and their large families. Naturally, I fictionalized the story and filled it not only with rich period details, imperial waltzes and the clanking of crystal champagne glasses, but also with cut-throat intrigues, revolutions, and an elaborate game of love and royal marriage politics. I sincerely hope that you will enjoy catching a glimpse of the House of Habsburg, one of the most fascinating royal families of their time, and the people tenuously associated with it.

If you enjoy the dazzling splendor of the Habsburg Empire and Austrian history, then I have no doubt that you will love The Country Girl Empress. However, even if this sort of book isn't your cup of tea, there might be someone in your life who does enjoy historical romance, and I love to encourage my readers to give it as a gift. With the upcoming holiday season in mind, we all know that books make excellent stocking stuffers.

To all my readers who have been following my writing journey: Thank you for all your support, encouragement, and enthusiasm! You make the hard work worthwhile, and I could not have done it without you. If I have not "met" you yet, make sure you head over to one of my social media outlets and introduce yourself. Thank you for celebrating this book launch with me!  =)

It was THE romance of 19th century Europe! The young and dashingly handsome Emperor Franz Joseph I of Austria needed an Empress by his side according to his mother, Archduchess Sophie. The House of Habsburg was the most powerful ruling family in Europe, and the line of succession had to be maintained. For centuries, marriages had been arranged based on dynastic considerations and served the expansion of the Empire’s power and it was not going to be any different this time.

Princess Elisabeth was born on the 24th of December 1837 at the Wittelsbach Palais in Munich. As a daughter of Duke Max in Bavaria and his wife Ludovika, Elisabeth called “Sisi”, grew up with her many siblings far away from all protocol at the small castle of Possenhofen on the shore of Lake Starnberg. More of a tomboy than a princess, she spent much of her childhood there.

The years of Sisi’s youth took place in the background of an unsettled Europe. Revolts, revolutions, and political intrigue were part of daily life. However, when Duchess Ludovika, along with her daughters Néné and Sisi receive an invitation to join the imperial family in Bad Ischl for the Emperor’s birthday festivities, an elaborate game of love and royal marriage politics ensues and finds an entirely unforeseen end in the idyllic resort town.