Book Review of Love in the Time of Apocalypse

In this week's post I'm changing things up a bit. I recently had the pleasure of reading the book Love in the Time of Apocalypse by brilliant author Mark E. Thomas, who pens his work using the pseudonym T.E. Mark. While I do not review books often, I felt compelled by the premise of the story. 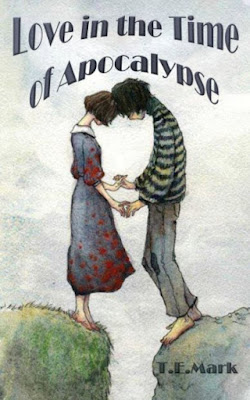 Love in the Time of Apocalypse
by T.E. Mark

T.E. Mark has done it again! He spun a new cosmic tale filled with adventures and good humour. Do not be fooled by the book cover! This is not some quaint fairy tale à la Jacob and Wilhelm Grimm. In his inimitable style, the author knitted this romantic spoof, sprinkled it with witty satire and hid an urgent message of peace within.

When a booming voice rips through the sky with the verdict, that the Intergalactic Affairs Committee has declared Earth a danger to the universe, London journalist Perry Bramble is the only one who doesn't fall to his knees in prayer. He's just a cynical, opinionated guy, bogged down by looming deadlines, trying to finish his work while constantly getting interrupted by his wife, Isadora. As a matter of fact, Perry is not at all impressed by the omnipotent being named Olgarb, the pain in the rear from another universe. Or is he from another dimension? Who cares!  And although Olgarb makes it abundantly clear that he's an alien not Deity, the people of Earth continue to worship him.

After decidedly voicing his opinions, Perry Bramble is whisked away to another planet located halfway across the universe, where he becomes young again. Now, a 22-year old geeky journalism student, he's tasked with guiding Earth’s leaders. He must teach them how to govern and negotiate rather than constantly wage war and save the world from damnation. And it is here that the main character learns the truth about nature, humanity and what really matters at the end of the day.

Love in the Time of Apocalypse is a great read that grabbed me after just a couple of pages, and didn't let me go until the end! T.E. Mark's seemingly endless imagination is showcased once again, in this meaningful yet silly novel about love, saving worlds, and above all preserving Mother Earth.