Break Out The Champagne: It's Time to Celebrate! 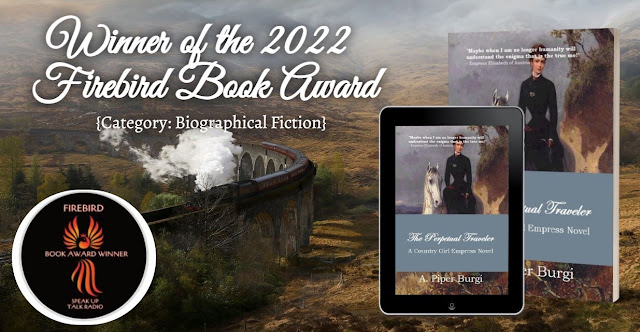 So, this thing happened yesterday. I checked my email to find that my historical fiction novel, THE PERPETUAL TRAVELER book three of #TheCountryGirlEmpressSeries, won the Firebird Book Award in the biographical fiction category. Woohoo! First thing I did is get out a bottle of bubbly and danced around the kitchen like a little maniac. I know - sounds totally silly right? But I just couldn't help it! I can't believe my good fortune!
About the book:
The great monarchies of Europe begin to crumble. From within, they face rebellions and revolutions, while outside forces cause further instability. But somehow the Austro-Hungarian Empire is spared thanks to one woman – Sisi! To escape the constant pressures of stringent court life, Sisi turns into a perpetual traveler and is seldom seen in the capital city. The Emperor, despite his deep love for Sisi, is still unable to break the chains of the strict court protocol, even though he continuously puts their relationship to the test with his behavior.

Just like the late Archduchess Sophie before her, Sisi begins to arrange suitable marriages for her older children to further the Empire's interests and ensure its continuance. The first to fall victim to her schemes is Archduchess Gisela. Then, Crown Prince Rudolph travels with his mother to Belgium to meet fifteen-year-old Princess Stephanie. But will this potential child-bride enflame the Crown Prince's heart, and more importantly, will Stephanie gain the Emperor's approval?

And things are also not what they ought to be in Sisi's beloved Bavaria. After repeatedly postponing his wedding with Sisi's younger sister Sophie-Charlotte, King Ludwig finally cancels their nuptials altogether. Rumor has it that his bride has fallen in love with the court photographer. But what is really going on in Munich, and what's the matter with Ludwig?

In mid-19th century Vienna, palace staterooms and bedrooms are not only filled with splendor but also with enticements, opponents and merciless conspiracies. Sisi now faces a new set of challenges. Can the beautiful Country Girl Empress weather these storms, or will she become the latest sacrificial lamb on the altar of the all-powerful Danube Monarchy?
by A. Piper Burgi
Piper is the award-winning author of The Country Girl Empress series. When she isn't busy typing on her computer, she can be found chasing after her furry children or holding on tightly to a good cup of coffee. Follow her on LinkedIn, Facebook, Medium, and Goodreads.
Don't forget to share this post! Choose your platform below: