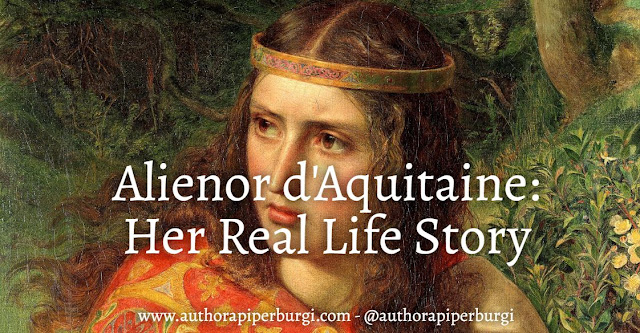 By now, my readers know that I've taken a short break from 19th century Vienna to go even further back in time and delve into the 12th century with my upcoming historical fiction book WITH THE HEART OF A LIONESS - A Duchess of Aquitaine Novel. The main character, Alienor d'Aquitaine, was one of the most powerful and noteworthy figures of the Middle Ages.

After she inherited a vast estate at the age of 15, she became the most sought-after bride of her generation. She would eventually be crowned Queen of France, then Queen of England, and even went on a crusade to the Holy Land. She is also credited with founding and maintaining many courtly rites of gallantry and introducing built-in fireplaces. Shocked by the frigid climate of the north after spending her youth in southern France, Alienor's invention spread fast, altering the domestic configurations of the time.

Alienor was born in Aquitaine, now known as southern France, around 1122 AD. She was well educated by her cultivated father, Guillaume X, Duke of Aquitaine. As a result, she was thoroughly versed in literature, philosophy, and several languages and trained for the stringencies of court life. She became her father's heir presumptive at a very young age after the sudden death of her younger brother, Guillaume Aigret.

As an accomplished equestrienne, she led an active lifestyle until her father's death, when she inherited his title and extensive lands at age 15. In one stroke, Alienor became Duchess of Aquitaine and thereby the most eligible woman of child-bearing age in Europe. The King of the Franks became her guardian and was betrothed to his son and heir, Louis, within hours. The King sent an escort of several hundred men to convey the news to Alienor and transport her to her new home.

Alienor, Queen of the Franks

Louis and Alienor were married in July 1137 but had little time to get to know each other before the King fell ill and died. Within weeks of her wedding, the bride and new Queen took possession of the drafty and unwelcoming palace in Paris that would be her new home. On Christmas Day of the same year, Louis and Alienor were crowned King and Queen of the Franks.

Louis and Alienor's first years as monarchs were fraught with power struggles with their vassals and the Holy Father in Rome. Still young and inexperienced, King Louis made a series of military and diplomatic blunders that set him at odds with the Catholic Church and several of his most influential nobles.

The ensuing conflict culminated in the massacre of hundreds of innocents in the town of Virtru. During the siege, many took refuge in a church set aflame by the King's troops. Dogged by remorse over his role in the tragedy, Louis responded eagerly to the Pope's call for a crusade in 1145. Alienor joined him on the dangerous westward journey, as she saw it as her opportunity to escape the French court and see the world.

The crusade did not go well, and Alienor and Louis became increasingly estranged. After several fraught years during which the young Queen and Louis faced increasing public criticism, they were eventually granted an annulment on the grounds of consanguinity in 1152. They separated, and their two daughters were left in the custody of the King.

Within two months of her annulment, and after fighting off attempts to force her to marry other high-ranking noblemen, Alienor wed Henry, Duke of Normandy and Count of Anjou. It was rumored that she had an affair with her new husband's father before their wedding and she was more closely related to Henry Plantagenet than she had been to Louis. Still, the marriage went ahead. Within two years, upon the death of King Stephen, Henry and Alienor were crowned King and Queen of England.

Alienor's marriage to Henry was more successful than her first, despite all the drama and discord. The couple argued often, but they also produced eight children. The extent of Alienor's role in Henry's rule is largely unknown. However, it seems unlikely that a woman of her education and energy level would have been without consequence. Nevertheless, she did not emerge again into an active public role until after she separated from Henry in 1167 and moved her household to her lands in Poitiers. While the reasons for the breakdown of their marriage remain obscure, it is conceivable that Henry's increasingly observable adulteries might have been to blame.

Alienor and the Court of Love

Alienor's time as ruler of her own lands from 1168 to 1173 established the legend of the Court of Love, where she is reputed to have encouraged a culture of gallantry among her courtiers. These practices had a far-reaching influence on literature, poetry, and music.

Although some facts about her court remain in dispute even today, it seems that the Dutchess of Aquitaine established a court primarily focused on courtly love and symbolic rituals. These, in turn, were eagerly taken up by troubadours and popularized through their poetry and songs. Alienor's court was reported to have attracted many artists and contributed to a blooming of culture and the arts. But no matter to what extent such a court really existed, it appears not to have outlasted Alienor's capture and imprisonment, as it effectively removed her from the eye of the public for the next 16 years.

In 1173, Alienor's son, young Henry, fled to France to plot against his father and seize the English throne. His mother, rumored to actively support her son's endeavors in a bold move against her estranged husband, was arrested and imprisoned for treason. Once captured, she spent the next decade and a half being shuttled between various castles and strongholds in England. Alienor was suspected of agitating against her husband's interests and was even accused of playing a pivotal role in the death of the King's favorite mistress, Rosamund Clifford.

After years of insurgency and rebellion, Young Henry finally succumbed to disease in 1183 and died. On his deathbed, he begged for his mother's release. Instead, King Henry released her under guard. He allowed her to return to England in 1184, rejoined his household for parts of each year, and resumed some of her ceremonial duties as Queen of England.

King Henry II died in July 1189, and their son Richard succeeded him. One of his first acts was to free his mother from prison and restore her freedom. Alienor governed England as regent in Richard's name. At the same time, he took over for his father in leading the Third Crusade, which had barely begun when old King Henry died.

After the crusade, Richard the Lionheart returned to England and ruled until he died in 1199. Alienor lived to see her youngest son, John, crowned King of England after Richard's death and was installed by John as an envoy to France. She would later support John's rule against the rebellion of her grandson Arthur. Alienor ultimately retired as a nun at Fontevraud Abbey, where she died in 1204.