A. Piper Burgi's next novel is set in 12th century Aquitaine - Get a First Look!

WITH THE HEART OF A LIONESS will hit bookshelves in 2023 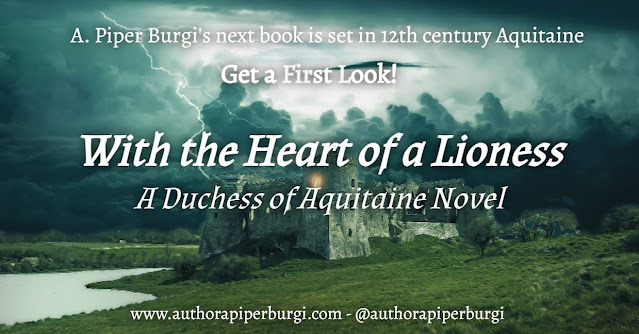 I'm taking a short break from 19th century Vienna and transport my readers even further back in time to 12th century Aquitaine. Following on the heels of THE EMPRESS'S DIADEM, book seven of #TheCountryGirlEmpressseries, I'm diligently working on WITH THE HEART OF A LIONESS, the story of Aliénor of Aquitaine, projected to release in 2023.
In the book, Aliénor has everything to look forward to as the heiress of the wealthy and powerful country of Aquitaine. Like most women of the 12th century, she is raised to marry well, sit motionlessly, and be agreeable. However, unlike any other woman, she is determined to be the only one to dictate what course her life will take. After all, she is the granddaughter of the infamous Duke Guillaume IX, called the Troubadour.
Here, I'm offering a first look at WITH THE HEART OF A LIONESS, with an exclusive cover reveal and a sneak peek at the book's first page. 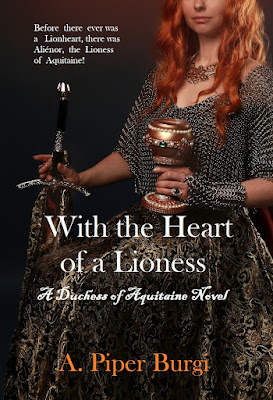 Excerpt from WITH THE HEART OF A LIONESS
A Duchess of Aquitaine Novel
by A. Piper Burgi
Chapter One
No one really remembers the night that the future heiress of Aquitaine was conceived. Even the year has been lost to history. Some said it was around 1122 or 1124 A.D.; others were convinced that the the women with the heart of a lioness was born earlier.
But no matter the timeframe, there was no thunderstorm, or a strange flight pattern to the migrating birds, or any other sign that an event of enormous magnitude was about to happen. Although, one could interpret her grandfather’s fit of anger as such. But the courtiers of Duke Guillaume IX were used to his outbursts as well as his hearty belly laugh, his sparkling humor, and his raunchy songs. That’s why they weren’t too worried but somewhat bemused as they watched as the Duke of Aquitaine, Lord of the Gascogne, the Poitou, Angouleme, and a dozen other domains, screamed at his oldest son and heir who carried his name.
“To Hell with it all, Guillaume! I will not listen to any more of this! It is my decision who I invite to my bed, and mine alone!”
The younger Guillaume had the expression of a beaten dog on his face. Although he had inherited the giant stature of his father, he didn’t have his boiling temperament. Albeit, no one could call him a coward, deep down, he hated arguing. At the same time, he could also be stubborn, and once he had set his mind on something, he wouldn’t let go.
“Your Grace,” he replied, “I only mentioned her because you treat her like the Duchess herself, which would make her my stepmother. Our whole house is being shamed!”
“What shames us and what honors our house is still determined by me!” the Duke spat. “And by God, my son, the lady is by all rights your stepmother. Therefore, you will accord her all the respect she is due as such, and don’t talk to me about family honor! After all, you are married to her daughter. Even if one cannot see any results yet!” he noted with a sarcastic undertone.
by A. Piper Burgi
Piper is the award-winning author of The Country Girl Empress series. When she isn't busy typing on her computer, she can be found chasing after her furry children or holding on tightly to a good cup of coffee. Follow her on LinkedIn, Facebook, Medium, and Goodreads.
Don't forget to share this post! Choose your platform below: