Break out the Champagne🍾: It's Time for a Book Launch Celebration! 🥂 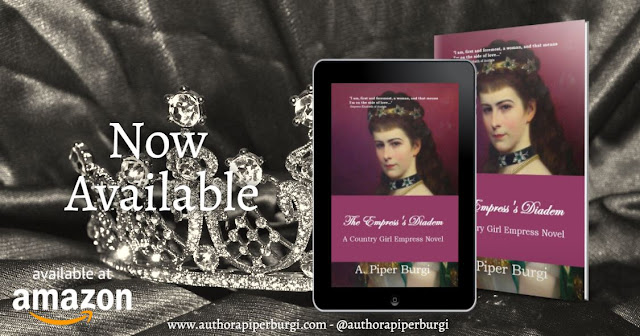 Thank you for joining me, celebrating the release of book seven of #TheCountryGirlEmpressSeries! THE EMPRESS'S DIADEM has finally arrived and has hit the virtual bookshelves! I still can't quite believe it myself...this is so exciting. Set in 19th century Vienna, the book is centered around real historical figures such as Empress Elisabeth of Austria, her husband Emperor Franz Joseph I, and their children. Come join, as their story continues! Naturally, I fictionalized the story and filled it with page-turning adventures, some danger, and a hint of romance.
If you enjoyed the first sic parts of this series, THE COUNTRY GIRL EMPRESS, A LIFE IN THE SHADOW OF THE CROWN, THE PERPETUAL TRAVELER, EXCERPTS FROM THE IMPERIAL DIARY, AT THE CASTLE OF DREAMS, and LOVE, POWER, AND THE EMPEROR WALTZ then I have no doubt that you will love this installment. But, no matter if this sort of book is your cup of tea or not, there might be someone in your life who does enjoy historical fiction, and I love to encourage my readers to give books as gifts, as they make great presents for any occasion.
To all my readers who have been following my writing journey: Thank you for all your support, encouragement, and enthusiasm! You make all the hard work worthwhile, and I could not have done it without you. If I have not "met" you yet, make sure you head over to one of my social media outlets on Facebook, LinkedIn, Medium or Goodreads, and introduce yourself.
About the book:
The heir to the throne, Archduke Franz Ferdinand, is faced with a difficult choice: Bidding farewell to the love of his life, Countess Sophie Chotek, and instead, fulfill his duty to the dynasty by marrying a stranger. He turns to Aunt Sisi for help in this crisis of the heart. She understands her nephew and wants to help him. However, she also loves her husband, with whom she has shared so much happiness and countless heartbreaks.

But the old laws of the House of Habsburg and the traditional-thinking Emperor Franz Joseph seem to make their relationship impossible. To be eligible to marry a member of the imperial House of Habsburg, one has to be a member of one of the reigning or formerly reigning dynasties of Europe. The Choteks are not one of these families.

Over and over, Empress Elisabeth of Austria seeks to escape the magnificent but spiteful Viennese court. She travels to foreign lands accompanied by her new Grand Chamberlain, General Béla Berzeviczy, and her ladies-in-waiting. However, she cannot avoid attending a once-in-a-lifetime event: The thousand-year anniversary of the Hungarian Kingdom!

The whole country is waiting for the state celebrations, exhibitions, and some representative new buildings to be completed on time. The largest exhibition is to be held in the City Park of Budapest, with dozens of structures and pavilions promoting the country’s historical, economic, and cultural greatness.

And the preparations for this massive event have already begun. Sisi is subjected to strenuous dress fittings and meetings with the K. and K. dressmaker, Madame Fuchs, and her crew since Her Majesty’s wardrobe for the occasion is of national importance. They are, after all, her beloved Magyars that want to see the “Hungarian Angel” on their soil again.

Vienna and Budapest, two pearls on the shores of the Danube River, are the focal point of the Empire. And they force Sisi into a dangerous conflict because her heart beats for the Hungarian nation. She is determined to calm the tensions between the two cities. With all her might, she fights against the many political interests and biases.
by A. Piper Burgi
Piper is the award-winning author of The Country Girl Empress series. When she isn't busy typing on her computer, she can be found chasing after her furry children or holding on tightly to a good cup of coffee. Follow her on LinkedIn, Facebook, Medium, and Goodreads.
Don't forget to share this post! Choose your platform below: