Book Review of Never Cry in the Night - The Novelettes of T.E. Mark Vol. VII 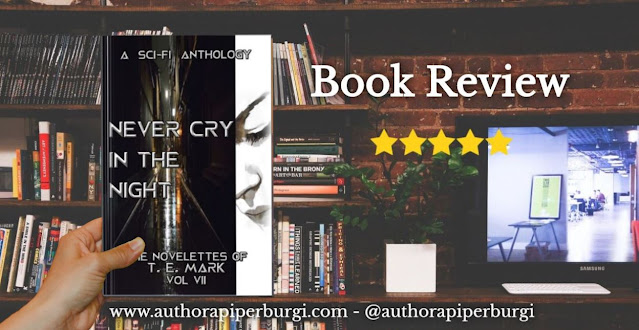 T.E. Mark penned yet another sci-fi anthology with fascinating twists and turns that had me engrossed from the beginning to the end. This enthralling read flowed from one scene to another with ease, and the author showcased an extraordinary storytelling mastery.
Derek 7: Derek Novak lives in the four short stories he just turned in for a literature assignment. The first one isn't so bad; at least it takes place on Earth. Following Derek and Mireia, a classmate is dragged in right along with him, watching them grow with each episode.
This first story is thought-provoking and amusing at the same time. There is a strong Sci-Fi theme, lots of action, and quite a plot twist at the end.
Entanglement: How would you feel about jumping forward into the future then falling back to the present? Would you be able to keep your knowledge to yourself and not interfere with things to come? The main character stops mass shootings, railway accidents, murders but inadvertently brings the world to an end with her courageous acts.
Throughout the book, there's a considerable time travel theme, and it illustrates that tampering with time can have dire consequences. The second tale will definitely make you think, as the race to the end will leave you short-winded. Fair warning about story number two: If you're a dog person and of a delicate nature, the opening scene might make you cry.
Never Cry in the Night: The theory that viruses were brought to our planet on comets is scarcely a new concept. However, what if they were sent here on purpose? With the world coming to an end from the effects of a humanity-ending pandemic, five scientists compete to contact the creator(s) when their investigations indicate the virus is not only self-aware but also intelligent.
The last story definitely has a surrealistic touch to it, as the author captured the current Zeitgeist. While the entire book is sensitive and sweet, the second story is probably the most powerful of the three.
This page-turner has plenty of attention-grabbing moments that will take the reader on quite an extraordinary ride. I highly recommend NEVER CRY IN THE NIGHT and give it a much-deserved five stars!
by A. Piper Burgi
Piper is the award-winning author of The Country Girl Empress series. When she isn't busy typing on her computer, she can be found chasing after her furry children or holding on tightly to a good cup of coffee. Follow her on LinkedIn, Facebook, Medium, and Goodreads.
Don't forget to share this post! Choose your platform below: